The word is defined as “without previous instance; never before known or experienced.”

For the second time in my career in intercollegiate athletics, my university and my athletic department are dealing with an unprecedented situation.

Now, of course, it is the global pandemic caused by COVID-19 which has forced everyone at NIU, across the country and throughout the world, to drastically change nearly every aspect of daily life.

Back in August of 2005, it was Hurricane Katrina and the aftereffects that displaced the residents of an entire city, including the staff and students of Tulane University, where I was the associate athletic director for media relations.

While these two “unprecedented occurrences” are different in many ways, the similarities have had me thinking back to that fall semester of 2005 quite a bit over the last many weeks.

Probably the biggest difference in the two situations is the scope. Hurricane Katrina, and the ensuing breach of the levees, devastated a major American city, the surrounding area and its inhabitants. More than a million people were displaced, nearly 2,000 died and the cost was estimated to be in the $125 billion range.

Those figures seem small now compared to the ones we see in the news today, as most of the country is under a stay-at-home directive and sports arenas, movies, shops, restaurants and bars are closed. More than 116,000 (as of June 15) have died from coronavirus in the United States, more than 5 million people have been infected worldwide. It’s unfathomable.

Aside from the scope of the crisis, the other major difference today, as compared to 2005, is technology.

When Tulane’s student-athletes and staff evacuated the city on Sunday, Aug. 28, 2005—along with anyone who could get out—they packed for a few days, a week at the most. No one dreamed that not only would the staff and student-athletes not be together as a complete group again, but that within 24 hours of leaving the city, just communicating with each other would become incredibly difficult.

Back then, flip-phones were the norm, and most people rarely, if ever, communicated via text. (The first iPhone wasn’t launched until 2007 and smartphones didn’t become “popular” until 2012.) I learned how to text while evacuated during Katrina. Imagine texting “NIU” on a flip phone—punch the 6 twice, then the 4 three times, then the 8 twice! Cell phones were all connected to the area code where you lived (remember roaming?), and when the cell towers in New Orleans went down, phones with a 504 (New Orleans) area code became almost useless, except for texting.

In addition, the floods in New Orleans destroyed the building where Tulane University’s servers were located. Not only were we unable to reach each other via phone, but university emails were also not working. The university website—a main source of information for the entire campus and constituents—was connected to those same servers and inoperable.

One of the first tasks I had to accomplish after evacuating was to compile a list of personal email addresses for the athletics staff, and in many cases, that meant getting coaches and staff to create personal email addresses. The next step was getting phone numbers, as staff had to go to the phone stores in their evacuation sites and secure new, functioning cell phones (mine had an Alabama area code).

Of course, with no smartphones, “social media” had not taken over. (Facebook was first made available to the public in September 2006.) Websites, including Tulane’s official athletics website, as well as newspapers, radio and television were the primary source of news and information.

During the COVID-19 pandemic, communication methods have expanded in order to replace face-to-face interactions. NIU has transitioned to remote learning for its students and staff are able to connect via virtual meetings while working remotely from their homes. Social media is being widely used to keep teams connected with each other and with Huskie fans. Without these types of capabilities, Tulane University was forced to completely shut down for the Fall 2005 semester. The faculty and staff, the students, student-athletes and athletic staff were nomads with no home and no campus.

Today, helpers and heroes—some unlikely, some expected—have stepped up to see us through this time and keep essential services functioning. Healthcare workers, truck and delivery drivers, grocery store and pharmacy workers and public safety officers are continuing to work and serve. In September 2005, the displaced Tulane community found help at every turn.

At the university level, schools across the country offered Tulane students the chance to continue their studies on their campuses, often at no cost. The Green Wave football team, which spent two nights sleeping in a gym at Jackson State University that lost power and air conditioning when Katrina made its way through Mississippi, made it to the DoubleTree Hotel in Dallas three long days after leaving campus. The community brought clothes and food, professional teams reached out with tickets, local schools offered access to facilities, and the national media descended on the hotel looking to tell Tulane’s story. 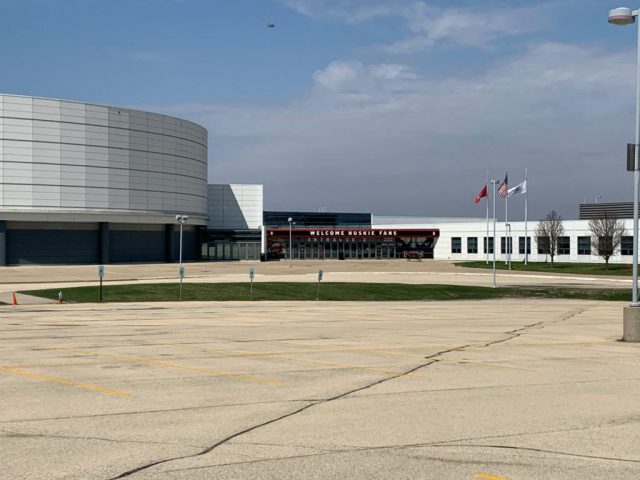 Unlike today, when the complete shutdown of sports has fans missing watching games and student-athletes unable to compete, the seasons were starting in 2005. College football’s opening weekend was coming up, as was the NFL season. NCAA volleyball and soccer seasons were underway. Just a few days after arriving in Dallas, with no other part of the university functioning at full capacity, Green Wave teams were asked to “carry the torch, be the face and represent the name” of Tulane University by continuing to compete during the fall semester while its students, faculty, staff, fans and the entire community were displaced.

That brought another challenge—finding locations where teams could gather, practice, work out, attend classes, live and even play games. Eventually, the athletic department sent its teams, coaches, staff and their families to four different campuses in Louisiana and Texas, using donated equipment, makeshift uniforms and sharing practice space with teams who opened their doors to the Green Wave.

At both Tulane and NIU, the safety and well-being of our student-athletes has been the top priority. In 2005, that involved making sure the students were safely evacuated from New Orleans, getting them to their new campuses and enrolled in classes, and providing them with room and board, uniforms, equipment, work out gear and more. When seasons were suddenly canceled on March 12, NIU staff and coaches quickly arranged to bring teams that were on the road back to campus. During this stay-at-home order, Huskie coaches and sports administrators organize virtual team meetings via Zoom or Microsoft Teams, academic coordinators arrange tutoring sessions, athletic trainers check-in via text and more. The health and safety of student-athletes, even during a time when teams must be apart, remain at the forefront of our actions.

Both of these unprecedented situations presented (and still present) daily challenges and issues that must be worked through. This was especially true in the early days of the crisis when leaders have to make timely decisions; information must be gathered and plans put into action. Today, just like in Katrina, no one knows exactly what the future—whether next week, next month, three months or a year from now—looks like.

On Thanksgiving Day, 2005, I left the garage apartment in Dallas where I lived that fall and returned “home” to New Orleans, although it was not the New Orleans I had left. Tulane student-athletes completed the semester on their temporary campuses, and the football team finished the season after playing 11 games in 11 different stadiums in 11 weeks. I was there for all of them. On December 18, 2005, the Green Wave women’s basketball team played a home game on Tulane’s campus, the first collegiate or professional competition in the city since Hurricane Katrina.

Today most of us are able to be—in fact, we are required to be—at home. It seems difficult until you think about not being able to get home. We’re able to use technology that goes well beyond text messaging to learn, to work and to connect. Northern Illinois University is up and running, if not in the traditional sense.

When we are able to leave our homes and return to our offices, when businesses re-open, when people can once again gather and the Huskies can take the field, there are sure to be continuing financial, social and societal effects of this COVID-19 crisis. Life may not be the same, but we will adapt, and we will go on.

I’ve seen it before.