A 1981 graduate of NIU, Rick Kennay expanded the family’s fifth-generation farm in Ashton, Illinois, to open the distillery in March of 2019 in the historic Hub Theater in downtown Rochelle. His nephew, Adam, a 2005 NIU graduate, distills, while his daughter, Aubrey Quinn, does marketing for the business.

The family has donated hundreds of gallons of hand sanitizer created in the distillery to local police, fire departments, and healthcare facilities.

“Obviously, there are only a certain number of distilleries in the United States able to do this. We’re happy to be one of them and helping our frontline workers and police and fire,” Quinn said.

“They don’t have a choice. They have to go to work every day. If we can help make them a little bit safer, we’re happy to help.”

Since creating their first batch of hand sanitizer on March 20, the Kennays have received an average of more than 400 hand sanitizer requests daily online and 300 to 600 calls a day. 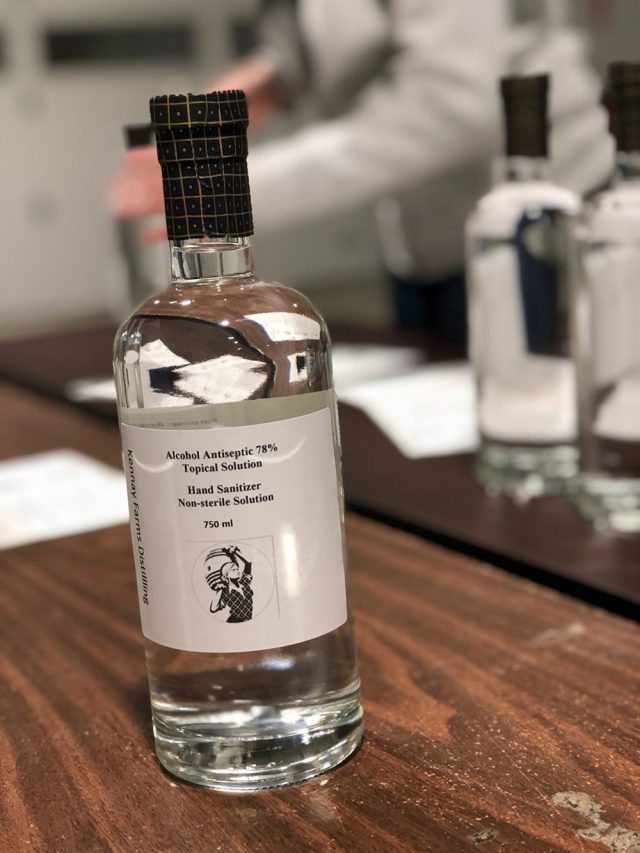 After the first week, in which more than 50 police and fire departments and healthcare facilities received donations, the hand sanitizer was made available to the public for purchase.

“Now, as we get requests from the same essential services, we try to still donate the first bottle, half-gallon, or bucket, and the rest is on a purchase basis,” she said. “There’s a great need for hand sanitizer, and we are in a position to produce it in large quantities. With the tasting room closed, we had no other income coming in. It seemed like a very smart choice.”

When open, the tasting room at the distillery offers high-end vodka and a “light, sweet” gin, while bourbon and whiskey age in their rickhouse just west of the distillery. The business also features a brewery where ales, lagers, stouts, IPAs, and premium and seasonal beers are created and served in-house.

Created in what was once the theater balcony, the tasting room overlooks the distillery where customers can watch Adam—also a tour guide—put his skills to work.

Along with the unique setup, the distillery draws intrigue because of the building’s history. The theater dates back to 1931, with movies shown off and on until it shuttered for good in 2011. It sat nearly empty, at risk for demolition, before the Kennays renovated it.

“We took something old and we made something really nice. Simple, but really elegant,” Rick said.