On nice days, Lisa Freeman will walk the mile or so from Northern Illinois University to her DeKalb home. Along the way, she’ll stop behind the fountain near Davis Hall, with the building’s observatory rounding out the sky. She’ll take it all in. The nearby modern art sculpture. The sun reflecting off the lagoon waters. The castle towers of Altgeld peeking back at her.

“To me, when I stand there, I see what makes this university,” said Freeman, who became NIU’s 13th president in September after serving as acting president since July 2017. “I stop there and look around and think how lucky I am.”

She sees beauty in it all. The modern and historic buildings, the atmosphere, the diversity, the people. Especially the people.

“When you live and work in places with a lot of young people,” she said. “It makes you young and optimistic about the future. You reach a certain age and you’re focused on how things used to be. Young people focus on how things are going to be. That’s so much better, so inspiring to be around.”

“I Certainly Hope I’m not the last”

Hers is a world of art, science and humanity, all blended together as seamlessly as the books stacked on end tables in her Altgeld office and the student-created pieces of artwork hanging on the walls.

As the artwork in the presidential office rotates, Freeman always ends up buying a couple of pieces, unable to let them go.

Most fill her home, while she’s kept a couple of pieces with her since her days as executive vice president and provost at NIU. “I fell in love with those two,” she said, pointing toward a couple of framed black and white photographs, one depicting a close-up of an old typewriter.

It’s an office she never imagined she’d one day occupy — an office she calls “The University’s Office,” not her own. Yet one she’s become the first woman to hold.

“That makes me proud, and I guess it makes me sad kind of at the same time,” she said regarding the attention she’s been given as the first female president of NIU. She hopes one day the country will reach a point when there are so many female pioneers in all fields, there’s no need to point it out anymore.

Her appointment garnered a Congressional Record statement from Congresswoman Robin Kelly, U.S. representative from Illinois’ 2nd District, who earned her Ph.D. in political science from NIU in 2004. Kelly praised the inclusive learning environment Freeman has fostered and her “steadfast and visionary leadership.”

“In particular, Dr. Freeman’s own personal examples as a barrier-breaking researcher in the STEM field will certainly inspire many young people to find their own place and path in the dynamic, growing and innovative STEM fields,” Kelly wrote.

“If it helps others, especially other women who aspire to leadership roles, to see me as the president of NIU, that makes me very proud. And I will always talk to anyone, male or female, about their career aspirations if they think I have something to offer,” Freeman said. 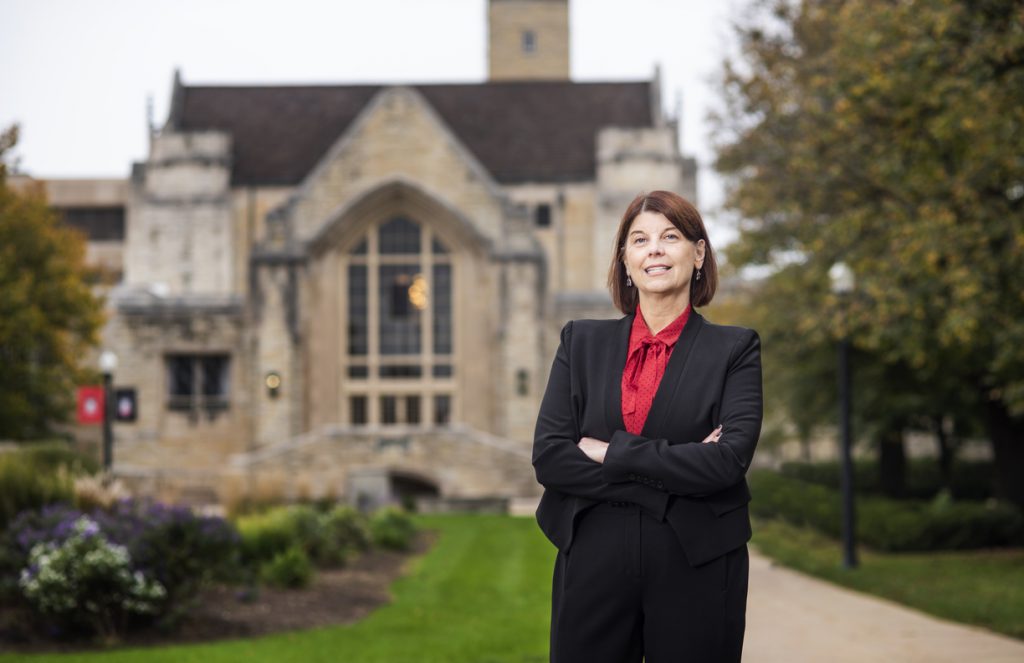 From her days earning advanced degrees in biology, physiology and veterinary medicine from Cornell University, along with a Ph.D. in pharmacology from The Ohio State University — later working as a postdoctoral fellow and research scientist — Freeman has spent her career in male-dominated fields, “kind of oblivious to it.”

It even stretches back to high school, where she did statistics for the football team and managed the lacrosse team, likely where her love of sports developed.

Freeman grew up examining her stuffed animals — not dolls — with a toy stethoscope. This love of animals is reflected today in the Labrador retriever mix Gabe and three cats — “all, in some ways, special-needs animals with interesting histories” — she and her husband, Dr. Doug Rose, adopted.

But much more shaped her career path.

“From a very young age, as long as I can remember, it wasn’t about if I would go to college — it was about where I would go to college,” said Freeman, whose mother was the first in her family to earn a degree and became a first-grade teacher. She gave her daughter the college talk at age 3. Then, at age 8, Freeman got the “five rules” talk.

Always try your hardest. Learn from your mistakes. Take responsibility for your actions. Follow the golden rule: Do unto others as you would have them do unto you. And don’t be afraid of people who are different than you.

“It’s amazing advice,” Freeman said. “I think the world would be a better place if everyone followed my mother’s rules.”

Her biggest accomplishment today, is sticking with those lessons ingrained into her years ago, she said.

“I think my mother would be not just proud of where I am, but proud of how I got here,” she said. “I think I’ve retained the respect and trust of people who I’ve had to say no to, who I don’t always agree with.”

Those qualities, among others, that make her “uniquely qualified,” for the job, said NIU Alumni Association President Peter Garrity, ‘71, M.B.A. ‘76, a member of the Presidential Search Planning Committee, which developed a comprehensive presidential profile.

“It soon became clear Freeman fit the profile. She’d worked her way through the ranks and could build consensus, while also making the hard decisions,” Garrity said.

“During her interim position, she didn’t, to me, treat it as an interim,” he said. “She treated it as acting in a leadership role at a university that needed to be led and needed to be moving ahead.”

“From athletics to academics to any of the activities at NIU, she’s involved and committed,” Garrity said. “She’s engaged. She’s everywhere.”

Since joining NIU in 2010 as vice president of research and graduate studies, Freeman has embodied Huskie pride. It’s a spirit she likes to describe as “smart, tough and relentless,” borrowing a slogan from the NIU athletics department.

Her energy is evident in the words of those around her. Even the clothes she wears — pretty much always red and black.

“Google knows this,” Freeman said. “I can’t open my Google account without a little red and black fashion show across the screen. The fact we have technology to capture that is, in one way, pretty scary and also pretty convenient.”

Freeman sees the value in social media when it comes to the university and celebrating students, but she misses the days when interaction required talking to neighbors.

“There are a lot of small towns where people have political disagreements and different churches and feuds over property lines. Yet, when your car goes in a ditch, their tractor is there to pull you out,” said Freeman, who has lived in small rural towns at different points in her life. As part of her husband’s health service core experience, he provided care to an underserved area in Appalachian southern Ohio.

“It’s this compassion, combined with her knowledge, that draws people in,” said Dennis Barsema, ‘77, vice chair of NIU’s board of trustees. “She leads by her values.”

“From the very first time I met her, I realized I was dealing with a very intelligent person who also has a personality and a way about her that is very engaging,” he said.

“I couldn’t be more pleased that she’s the president of NIU. She has an outstanding love for the NIU family. She demonstrates excellent transparency in everything she does, but she also is good at holding people accountable and getting results. We have a lot of work to do, but Lisa and her team and the board of trustees have a really solid road map going forward. We all have a lot to look forward to.”

NIU President Lisa Freeman and her husband, Dr. Doug Rose, believe NIU students are the best investment in the future.

To prove it, they’re donating $25,000 a year to the NIU Foundation. The gift will be used for student scholarships.

“Both of us were raised to believe strongly that education provides you with an opportunity to improve your life,” said Freeman, who became NIU’s 13th president in September after serving as acting president since July 2017. “Helping other people have that opportunity is something that is very important to both of us.”

They didn’t actually date until a few years later.

“Still,” Freeman remembered, “It was one of those across-the-room, ‘we-knew’ moments.”

“We kind of kept track of each other,” she said.

When Rose graduated from medical school, she sent him a congratulatory card. He told her he’d stop to see her on his way to his residency, although she was in Upstate New York — nowhere near on his way.

First married when Freeman was in professional school and Rose completed his residency training, they wondered if they’d have enough money to pay the bills.

It’s something they’ve never forgotten as they’ve both advanced in their careers.

“We’re impressed with NIU and Huskie students,” Freeman said. “I think we want to set an example. We want to show everybody we believe our students are the best investment in the future.”

Freeman joined NIU in 2010 as vice president of Research and Graduate Studies and subsequently served as executive vice president and provost before becoming acting president, then president. Over time, Freeman has become a true Huskie — in love with the university.

“I love the location and the fact that in the 60 miles between DeKalb and the Lake Michigan shore, you have agriculture, suburbs and a world-class city,” she said. “I love the diversity of NIU in every dimension, especially the diversity of our student body. I love the fact NIU has a tradition of offering transformative experiences to students who are the first in their families to go to college. I also like the fact NIU is really engaged with the communities around it and across the region.”

Reflecting her beliefs, Freeman has built partnerships NIU never had before — with the community, corporations and firms throughout the nation, and the alumni base, said Wheeler Coleman, ‘83, former chair of the NIU Board of Trustees.

Those partnerships will pay dividends for future alumni, he said.

“We want our alumni to be engaged. We want their place of businesses to be engaged with NIU and find a way to either hire our students or to give to our students, whether those are opportunities or scholarship dollars, to help get NIU to a point where we’re not as dependent on government funds for operations,” he said.

“Making Lisa the permanent president of our institution, someone that has intimate knowledge of our operations, our strengths and our weaknesses, allows us to move at a much faster pace. And the pace should be swift. We’re going to do some creative things. We’re going to be reaching out to alumni like never before.”